For a few months now I’ve been eyeing the Urban Decay Liquid Moondust eyeshadow in Recharged. It’s the same beautiful shifting color as Urban Decay Eyeshadow in Fireball which I really love and I was more than curious about the liquid moondust edition of it. 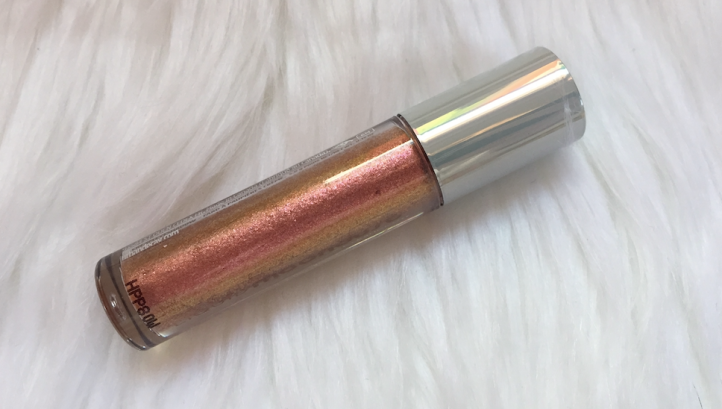 Recharged is a rose gold color with a oranje shift.

The brush of this eyeshadow is really tiny and pointy. I guess that would be nice if you want to use the eyeshadow as a thin liner or for detailed stuff, but for applying it to my whole eyelid it’s way to small. It takes me a while to get the shadow everywhere and it makes the application pretty streaky. Bummer! 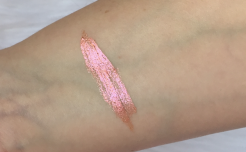 This is how the color shifts; it depends on how it catches the light.

This swatch clearly shows that the brush applies the product pretty streaky, making the pigmentation and intensity uneven.
That tiny glitter in it (nothing chunky or anything, it’s subtle and beautiful) makes the reflection of the light beautiful. 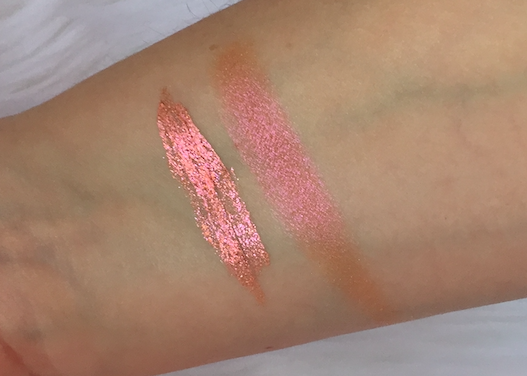 I’m wondering why the name of the two isn’t the same though. I believe that there’s a (glitter?)liner out there with the same color, but that one is called Fireball as well.

The product is easy to apply to the eyelids. I do find that, because of the streakiness, the product needs some layering before the color and shine are actually showing up enough. The product dries pretty fast, making it easy to work with (to prevent having the eyeshadow everywhere where it shouldn’t be). I love how it looks in this eyelook and how bright it makes my eyes.

Having said that, I am really disappointed of how the product dries. It dries quick and all which is a good thing but the eyeshadow breaks when it dries, making it flaky and quite ugly when you look at it up close.

To me this looks like a layer that needs to be pulled of or something, like a clay mask that dried down or that shattering nailpolish that was a trend a few years ago.

I am so so bummed because of this! I love how it looks and I adore the color, but this dried down finish looks awful.

I would love to know from you guys if you have experience with the Urban Decay Liquid Moondust Eyeshadows and if you maybe have tips on how to prevent it from drying down like this! Let me know in the comments! 🙂