I’ve been into discovering PS… (Primark Beauty) products lately and I’ve already found some gems for the money!

Last week I found little 3×3 eyeshadow palettes that retail for only €3,50 (say whatttttt!!). The palettes are available in three (or four, not sure) but I loved the Berry Edit and the one with gold and brown shades the most. I wanted to try out only one to start with though but I can already tell you that I am going to pick up the gold/brown one as well! 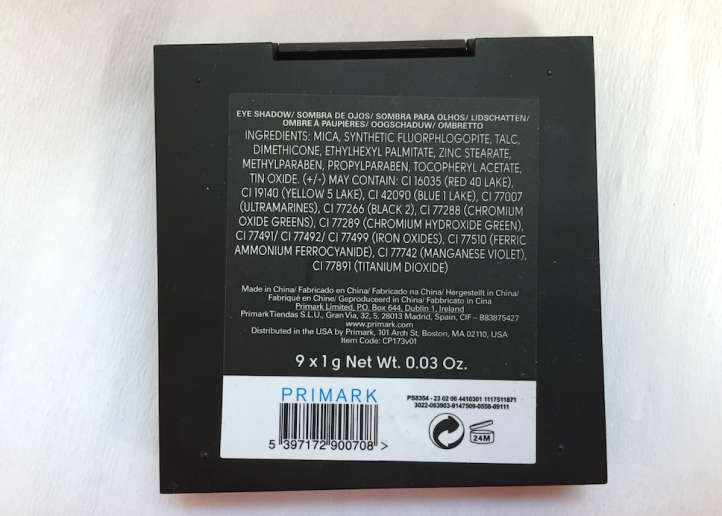 This is the PS… Shadow & Shade The Berry Edit Eye Shadow. It has a mix of matte and shimmery shades (only two mattes though but more on the later) and it contains a complete eye look. I love how bright the colors are and how well they look together.

The matte colors are the peachy nude in the middle and the mauve color in the down left corner. It does look shimmery in the pan but when using it, it’s matte.

All the other shades are shimmery. The white one and two light pink shades are also duochrome and more glittery than shimmery.

The palette feels really strong and actually pretty luxurious. The pans are really small (only 1 gram of product) but since I like to switch the product that I use around every day, I don’t mind that at all, especially not for the price. The white shadow has some pink on the inside as you can see in the pictures but that’s because I dipped in with a brush that had some pink shadow left on it, oops.

The palette closes with a magnet and that also makes it feel and look pretty luxurious to me.

However, the eyeshadows smell SO SO GROSS. I hate the smell of it but I can live with it because you don’t smell it when the palette is closed and I don’t smell it anymore when applied on my eyes. So yeah the smell tells me that it’s a cheap palette but for the looks, you wouldn’t be able to tell (well, if you wouldn’t see the obvious €3,50 sticker, haha).

The swatches are not bad! The white shade (first from left) is awful though because it only shows a little reflective glitter but no pigmentation what so ever. The shimmery shades (2, 3, 4 and 6 from left) have a nice pigmentation and are pretty creamy. The two matte shades (5 and 7 from left) are okay in pigmentation. Quite chalky but when blended enough they are pretty nice to use.
The two shades on the right are both supposed to be shimmery but when I swatch them and use them on my eyes, they are really chalky and nearly show any shine.

There is enough variation to be able to make a whole eye look but there is not much to change it up. Shades 2 and 6 look a lot like each other and the same goes for 7 and 8. 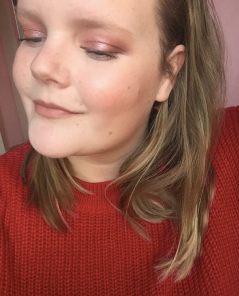 When blended enough and when the color is build up, the eyeshadows actually make a really nice look! For this look I used 5 and 7 in the crease, 9 in the outer corner of my eye, 1 (combined with the highlighter of the PS Chocolate Cheek Palette) in the inner corners and under my brows and I applied 2 on the eyelid.

I found that 2 lost the pigmentation when applied with a brush though. All that was left was the colored glitter but when applied with just my finger, it was way better and really pretty! There is a lot of glitter in it though (opposed to the other shimmer shades that are more all over shimmery) but I liked it for this look.

This eye look stayed put the whole day and only faded a tiny bit. As usual, I used some concealer to prime my eyes.

By how this eye look came out, you wouldn’t be able to tell that it was made with an eyeshadow palette of only €3,50! The shades did have quite a bit of fall out so I would recommend you to start with the eyes first and do the complexion after.

What do you think of this palette?